Arsenal And The Copa America

Written by Tim Stillman on 14 June 2015. Posted in Stillmansphere

Last season, Arsene Wenger attributed Arsenal’s slow start to the campaign, at least in part, to a “World Cup hangover.” Including Danny Welbeck, 12 Gunners’ players took some part in world football’s great menagerie in Brazil. Podolski, Özil and Mertesacker went the distance and came back as world champions- with the effects on all three rather obvious before Christmas. Laurent Koscielny and David Ospina returned with injuries, whilst Mathieu Debuchy, Mesut Özil and Olivier Giroud picked up medium term injuries before the autumn. This summer, most of Arsenal’s squad will have a little more time for rest and recuperation. But not all of them. There is the small matter of the Copa América in Chile, which got underway on Thursday. For Alexis Sanchez and David Ospina, the summer break could be deferred as late as 4th July. The Copa isn’t always taken seriously by participating teams, it marks the beginning of a new cycle of competitive games for South American teams. The bigger squads often willingly leave the big guns at home for the Copa, but not on this occasion.

Argentina are 22 years without international silverware, so the likes of Aguero, Messi, Mascherano and Tevez are all included in their squad. Brazil are looking to cleanse the stain of last summer’s semi-final humiliation, so that means Neymar will play a fifth consecutive summer tournament. This brings us neatly to Arsenal’s involvement. Chile, as hosts, are looking to banish a 99 year trophy hoodoo. They have never won a major international competition (comparatively smaller sides such as Peru, Paraguay and Bolivia have managed to win the Copa at some point in their history).

With possibly their greatest squad ever, and as hosts, the Chileans are under a unique pressure in this tournament. On home soil, they finished 3rd at the 1962 World Cup, this summer is seen as Las Rojas best ever chance to collect silverware. Much of that responsibility falls on their star player, Alexis Sanchez. Chile are a high pressing, hard working side, adopting a style very much akin to Jürgen Klopp’s ‘heavy metal’ Dortmund side. They lack creativity, so must rely on pressuring their opponents into mistakes and of course, they are dependent on Alexis for a sprinkle of stardust. Gunners’ fans will be only too aware of how Alexis’ hyperactive style fits into this industrious machinery. A sizeable physical and mental assignment awaits Arsenal’s livewire Chilean this summer. Chile are a good outside bet for the tournament, but still aren’t quite up to the standard of more decorated neighbours Brazil and Argentina. A heart breaking exit late in the tournament is a distinct possibility for the Chileans - on their own doorstep too. Should this eventuality come to pass, it’s possible that Alexis will melt into his truncated vacation tired and a little downtrodden. That said, I don’t harbour any doubts about his ability to cope with the mental side of such a scenario. Likewise, if Chile write national history by emerging as winners, I wouldn’t expect Alexis to suffer from the motivation issues that Per Mertesacker described in the autumn. This is not because I think Alexis to be psychologically strong per se. I just imagine that every time he sees a football, his brain instantly empties of all other distractions. Like a cat chasing the reflection of a watch face on the dining room wall.

David Ospina will not play with quite the same physical or mental stress levied upon Alexis. Though Colombia are also sporting something of a golden generation themselves. But as far as Ospina’s Arsenal prospects go, the Copa could be very bad news. It means that he will miss the start of next season and given the competition he faces for his place, even missing 3 games could be enough to relegate him to the bench. Whether or not, Arsenal sign a new goalkeeper, Ospina won’t have the opportunity to stake his claim for the number 1 shirt come August 9th. Whether it is Szczesny, Cech or another new goalkeeper in front of him, this could prove terminal to his club ambitions. Players at Copa América experience a sort of diseconomies of scale, not only is their start to the season delayed, but then it typically takes a few games to get back up to speed. It immediately puts them out of synch with teammates and opponents. 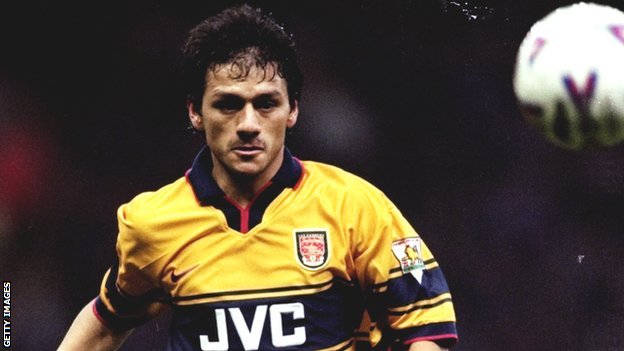 In Ospina’s case especially, there is a cautionary tale when it comes to Arsenal players at Copa América. Three Gunners’ players have participated in the past and their Arsenal career trajectories have all been negatively affected. Nelson Vivas competed with Argentina in 1999, following his first season with the club. In 1998-99, he was considered a trusted back up to both Lee Dixon and Nigel Winterburn and made 18 appearances in that campaign. He returned late for the 1999-2000 season and from here he really began to struggle. Wenger decided to sign Ukrainian right back Oleg Luzhny and Vivas was loaned out to Celta Vigo in January 2000. The Argentine managed to start only 11 more Arsenal games following the 1999 Copa América before leaving in 2001, most of these starts occurred in the unloved League Cup.

Edu Gaspar suffered some, ahem, “administrative” struggles when he first arrived at the club in 1999, but eventually, the Brazilian midfielder discovered his mojo. He was particularly impressive during Arsenal’s unbeaten season in 2003-04. Carlos Alberto Parreira’s interest was piqued and Edu was selected for the 2004 Copa América in Peru, which the Seleção won. Edu also returned late for the season and he found that competition for his place had increased in absentia. Patrick Vieira was injured at Euro 2004, which would have given Edu the perfect opportunity to enjoy a partnership with friend and compatriot Gilberto Silva.

But in Edu’s absence, 17 year old Francesc Fabregas had taken the opportunity afforded him and Edu found himself one rung further down on the midfield ladder. By the time Gilberto succumbed to a painful back injury, Vieira had returned to fitness and the door remained shut in Edu’s face. In an attempt to boost his ailing match fitness, Wenger gave Edu a run out in a League Cup tie against Everton, only for the out of shape Brazilian to break his foot in a wearily executed tackle. His contract was nearing its expiry and, as a result, Edu’s promising Arsenal career dissipated as quickly and unexpectedly as it had restored.

The last Arsenal player to compete at the Copa illustrates this tale of caution with even greater ennui. In the 2006-07 season, with Thierry Henry suffering his own tournament induced burnout, Gilberto Silva stepped up to the plate, both by assuming the captaincy and, surprisingly, via his goal scoring exploits. He scored ten goals during that season and left for the 2007 Copa with his Arsenal stock at its threshold. Gilberto captained Brazil to Copa victory in Venezuela, but arrived to altered circumstances in London. Henry departed in the summer of 2007 which, amongst other things, left the rank of captaincy open to a new incumbent.

Having captained the side with such distinction during the previous campaign, many presumed that Gilberto would assume the role on a full time basis, not least the player himself. He found out about William Gallas superseding him via the internet, the relationship between player and manager soured thereafter. Civil blood had made civil hands unclean. Had Gilberto been present and available for the beginning of the 2007-08 season, things would probably have turned out very differently. His initial absence due to international duty must have accounted for the manager’s decision to overlook him. Worse than that, whilst he recuperated from his summer exertions, Mathieu Flamini took his place in the team and to the surprise of everybody, excelled himself in doing so.

Gilberto’s status at the club had been turned on its head in the space of a single summer. He had been overlooked for the captaincy and lost his place in a new look Arsenal midfield. During 2007-08, he appeared only occasionally and eventually left for Panathinaikos in the summer of 2008. Like Edu before him, Gilberto found that by missing just the prologue of Arsenal’s season, he was forced to look on as an understudy at the season’s stage. The World Cup may carry a particularly severe hangover, but historically speaking, the Copa América seems to administer fates more wicked to Arsenal players. Whilst the thought of Alexis losing his place to a colleague is fanciful, both he and Ospina have been forewarned by the misadventures of their continental brethren.

http://twitter.com/stillberto Tell us what you think! If you agree, or have a different view, please leave a comment in the comments section or why not write a response or your own article on YouWrite?